M.C. and I are currently hard at work drafting Book 6 of the Winter’s Blight Series. We just reached 80k in the draft, and we have a little less than 1/3 of the book to draft. After that, we’ll take a week-long break before starting on revisions. I don’t yet have a release date for you, but I’m hoping it will be summer 2021.

I can’t wait for you all to read it and see what happens next! Thank you so much to everyone who has been leaving reviews and ratings on the other books. Here is a sneak peek of a line from the first draft:

Also, happy Valentine’s, Galentine’s, and Palentine’s Day to everyone! I hope you treat yourself or someone you love today.

Looking for an enchanting and captivating Gothic read to escape to? Tempest Cursed is narrated by the talented Fran Burgoyne, who brings the characters and the eerie but beautiful world to life. Here is what readers are saying:

“Whether you’re a fan of Wuthering Heights or not; this is a great read!” – Amazon reviewer

“This book was so good! I love romance books that make your heart stutter. I flew through this book in one day and I was so sad when it was over!” – Netgalley reviewer

“This book really drew me in. The setting in this novel was phenomenally written and made you feel as if you were there.” – Amazon reviewer

I hope and pray you have a blessed and better year in 2021. Thanks to you, M.C. Aquila and I had a huge rise in sales and reviews in 2020. We cannot thank you enough for reading and reviewing!

We’re currently hard at work drafting Winter’s Blight Book 6, which will release this year. I cannot wait for you guys to read it! I recommend that you subscribe here, on our BookBub pages, or follow us on Instagram, Twitter, or our Facebook page for updates.

In addition to Winter’s Blight, I will also be drafting and publishing the next book in my Gothic Retellings anthology this year. I hope to release it in August at the earliest. My previous novel, Tempest Cursed: A Wuthering Heights Retelling, will be available as an audiobook soon!

In addition, if you have questions or you just want to say hello, please do so by contacting me through this website!

“Are you prepared to pay the price for power?”

After standing trial in the Summer Court, James is sent on a quest to kill the Cait Sidhe, the monstrous faery cat who manipulated him into betraying the Seelie faeries and destroying the magical barrier that protected them. When the time comes to kill the beast, James decides to trick him into helping undo his mistake. But the man beneath the beast, Cecil Morris, is just as dangerous, and his manor, Heatherfield, is full of wild and deadly magic. In trying to reach Cecil, James risks being pulled into the darkness with him.

Cai, accompanying James to Heatherfield, escapes from the Cait Sidhe’s prison and fights for his life against Heatherfield’s deadly magic, determined to keep his oath to kill the beast even if it means making James his enemy. Kallista and Alan, also captives in the manor, face a fight of their own as Alan’s Unseelie magic slowly consumes him.

Meanwhile, newly-appointed Noble Faery Deirdre and her human champion, Iain, head into an ancient tomb to find her drachma, an item that will help her control her powerful magic and save the Summer Court from destruction. She must undergo a trial to earn her drachma, but dark forces lurk inside, waiting to use her magic against her and against all she loves.

The Thrall’s Gambit is book five in the seven-book Winter’s Blight series.

My novel Tempest Cursed will soon be available to enjoy as an audiobook! The talented @franburgoyne is narrating. So excited for you all to hear this magical, Gothic tale brought to live. More updates to come.

Listen to the first chapter here:

The audiobook will be available next month!

Check out the first few lines of Winter’s Blight Book 5 below:

Greetings, readers! I hope you are doing well and staying safe. If everything goes smoothly, you will have THE THRALL’S GAMBIT (Winter’s Blight #5) in your hands (Ereaders) on October 31, 2020! That’s NEXT MONTH! It’s the perfect slightly spooky Halloween read with Unseelie monsters, a magic manor, and the vicious, enigmatic Cait Sidhe. Look for the cover reveal in mid October!

I will update once/if the preorder is up by October 26. Thank you for reading, reviewing, and telling your friends about the series while you wait!

“If you want power, pain is a natural part of it.” – The Thrall’s Gambit (Winter’s Blight Book 5)

Greetings, readers! M.C. Aquila and I have been hard at work on Book 5. We are sending the book to beta readers next week! After that, all that’s left is final edits and proofreading. Here is an aesthetic board to give you a feel for the tone: 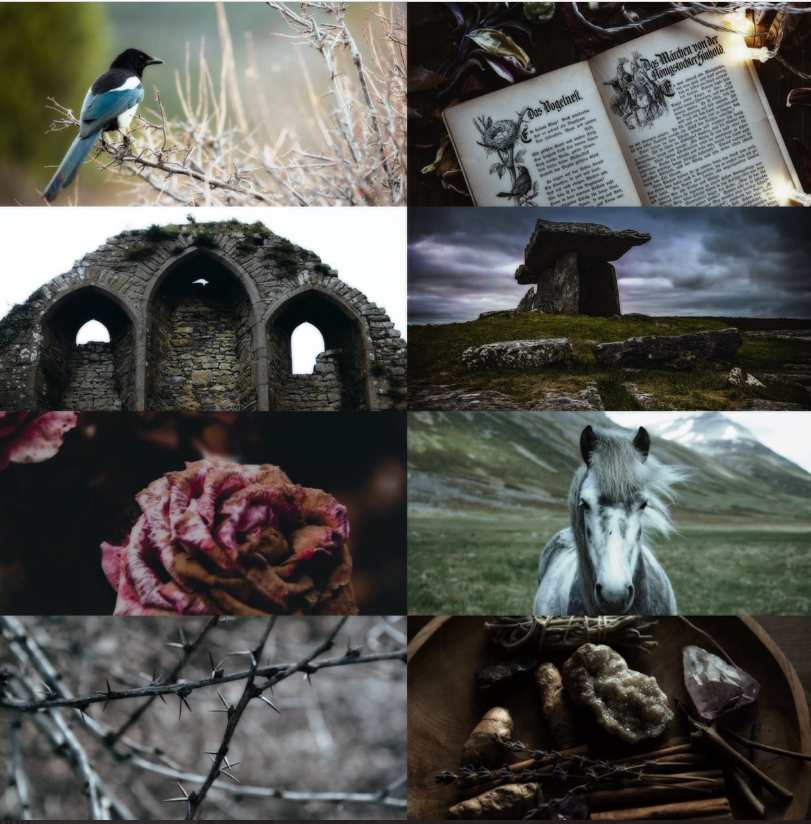 There are hints in this aesthetic. But as you can probably guess from the title, this book is a little more James-focused. Everyone gets their moments to shine as well, as usual!

Do you have any predictions about what’s going to happen? Honestly, after how Book 4 ended, I think anything is possible!

When Pearl searches for answers after her mother’s presumed drowning, she finds a boy with magic, Hake, instead. Their bond is tested when his monstrous nature is revealed and when the decaying sea-dwelling god who raised him seeks revenge on the island. Tempest Cursed is a loose retelling of Wuthering Heights in two parts 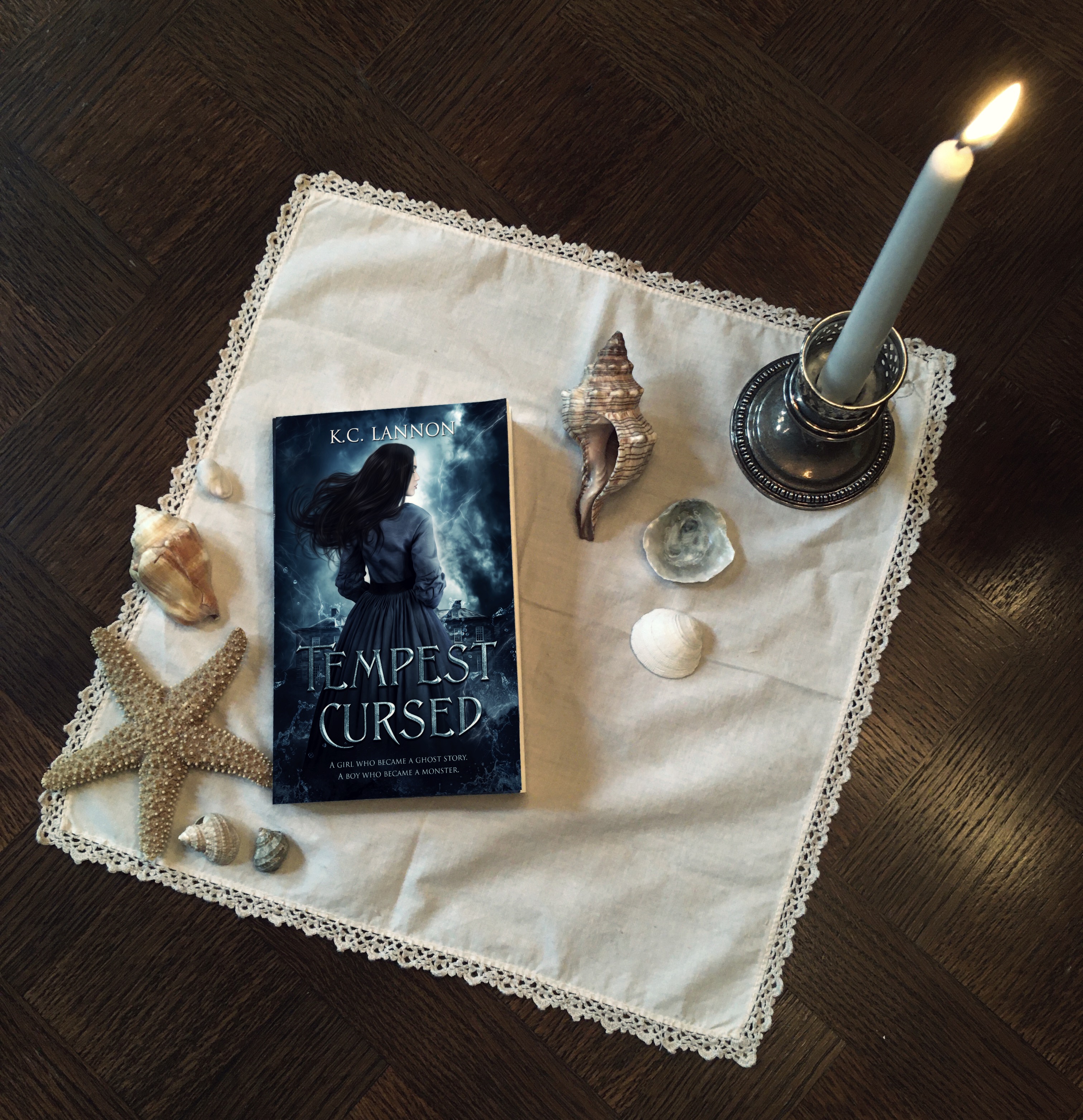 When Pearl searches for answers after her mother’s presumed drowning, she finds a boy with magic, Hake, instead. Their bond is tested when his monstrous nature is revealed and when the decaying sea-dwelling god who raised him seeks revenge on the island. Tempest Cursed is a Gothic YA fantasy retelling of Wuthering Heights.

🛡I love writing villains. I love writing their redemption arcs even more. 🛡
✨If you could live in one fantasy universe, which would you choose and why? ✨